A hands-on science activity helps students observe the role of the catalase enzyme in breaking down hydrogen peroxide in the body.

Enzymes in the Body

Enzymes are molecules in the human body that help speed up chemical reactions. Some enzymes help with the digestion of food in the body, but there are thousands of different kinds of enzymes, each designed to help with a specific reaction. For example, while you might use hydrogen peroxide externally, when hydrogen peroxide forms inside the body, it is harmful to cells. Luckily, there is an enzyme that helps neutralize oxidative compounds like hydrogen peroxide.

The enzyme catalase helps protect the body from oxidative cell damage by breaking down hydrogen peroxide to water and oxygen. An enzyme has an active site to which specific compounds attach. The molecules in the compound are referred to as substrates. Once the substrates attach to the enzyme, the chemical reaction is sped up, the reaction takes place, and the reaction products are released. In the case of hydrogen peroxide, water and oxygen are released. Once the reaction is complete, the enzyme is available again for another substrate, and the process repeats.

Students can see how this process works with a hands-on science activity that simulates the function of catalase enzymes in the body. Using hydrogen peroxide and yeast (which contains catalase), students are guided in a hands-on experiment with a control and sample solutions containing varying amounts of hydrogen peroxide. When hydrogen peroxide breaks down into oxygen and water, you can see the release of oxygen in the formation of bubbles (or foam). Observing and comparing the visible changes that occur with each sample solution, students can better visualize the enzyme activity that happens in the body.

The Exploring Enzymes activity contains the directions for this family-friendly science activity. 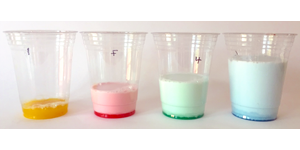