The first bite of a fresh-picked apple, the crunch of morning toast, the deep cut into rich, flaky layers of baklava, the pleasing snap of a chip. Besides being delicious, what do these foods have in common? They're crisp. They have a brittleness that causes them to shatter in your mouth when you first bite into them. It's a sensation that many people enjoy. Making potatoes crispy requires some extra cooking steps, as you'll discover in this food science project, but the results are well worth the effort. If you love to cook, try this science fair project, and become, not a potato masher, but a potato master!

To determine if a cold-water soaking process can improve the crispness of oven-fried potatoes.

Science Buddies Staff. (2020, January 12). You Want Fries With That? The Science of Crispy Potatoes. Retrieved from https://www.sciencebuddies.org/science-fair-projects/project-ideas/FoodSci_p042/cooking-food-science/science-of-crispy-fries?class=AQW7LRJKFzQal3WNj40zn5JCCydouVEgMEzp63P2cQEpM9Uot_6HfRxzNxE0Oxe44yXs-dy9hn-wA9sFaoEDN90MIF3af9EkVGdY8Lox7VOZ1vPq_fWJvJsunFL_eUJDqas

Potatoes! These earthy, dimpled lumps are the most popular vegetable in the United States, and the biggest vegetable crop grown worldwide. Originally from Central and South America, potatoes were brought back to Europe by Spanish explorers in the 1500's where they were prized for being hardy and inexpensive. They were soon the main crop for entire populations of peasants. Around the time of the Irish potato disease in the middle of the 1800's, for example, people were eating 5-10 pounds of potatoes per person, per day!

Potatoes are from the nightshade family of plants that includes peppers, tomatoes, and eggplant. Did you know that all these vegetables are related? Potatoes are a tuber, which is a swelling of starch and water that forms on the end of an underground stem. Plants grow tubers to store energy so that they can survive the winter and grow the next spring. The starch in the tuber is the stored energy. The starch molecules are long chains of thousands of simple-sugar molecules. There are two types of starch molecules: amylose and amylopectin. As shown in Figure 1, the amylose starch molecules have long, straight chains, while the amylopectin starch molecules are more compact and have branched chains. Potatoes and other tubers are unique in that their amylose chains are unusually long—four times longer than the starches in cereal grains. The granules that the starches are stored in are also much larger in potato tubers than the granules in most other vegetables and cereal grains. Tubers also contain a fraction of the lipids (fats) and proteins found in cereal starches. So, no matter what method you choose to cook your potatoes, the primary nutrient that you will be heating and transforming is starch.

Figure 1. This drawing shows the two kinds of starch molecules.

Potatoes can be boiled, microwaved, or baked but by far the most popular way to cook them is by frying them, deep-frying them in a vat of oil. Potato chips and French fries are eaten all over the world, and the special trick of double-frying them to get them crisp, has been known as far back as the early 1800's when street vendors sold French fries (pommes frites) on the streets of Paris, France. If you take a potato, cut it into pieces, and simply fry it in oil, it will not develop a nice, crispy texture. Instead, only a thin, delicate crust will develop, and the water from the inside of the potato will quickly soften that crust, removing any crispness, and making it mushy. Two stages of frying are required for the crispness to last. First is a low-temperature frying, which allows the starch in the granules from the outermost layers of the potato pieces to leak out, dissolve, and form a glue, which strengthens the external wall of the potato pieces, so that a strong crust can form. This strong crust will not weaken from the moisture inside the potato when it undergoes the second stage of cooking, high-temperature frying. The high-temperature frying allows the surface browning reactions to take place, creating greater depth of flavor, and crispness.

So, if you don't have a deep-fat fryer and want to fry potatoes at home in an oven, is it possible to get this same level of crispness without the two-step frying method used to make commercial chips and French fries? Well, baking is a completely different process than frying in oil (deep-frying or otherwise). You know that baking is different because you can briefly put your hand into a hot oven (obviously not touching any surfaces!) without getting burned, but you cannot ever put your hand into hot oil without getting burned. In frying, the food is surrounded by oil, which is much denser than the air that surrounds food during baking. This high density causes the high-energy oil molecules to collide more frequently with the food than the high-energy air molecules do in baking. So, frying raises the temperature of the food much more quickly than baking does. In addition to the density issue, cold food in a warm oven develops a boundary layer around it, made up of both air molecules and water vapor evaporating from the food. This boundary layer slows down collisions of the warm air molecules with the food. Finally, the energy used in evaporating water from the food's surface reduces the energy around the food that is available to move to the center of the food, further slowing down the warming of the food. All of these factors taken together make baking a much less efficient cooking process than frying.

One way to improve the energy transfer from the hot oven air to a food like potatoes is to coat the potatoes in a thin layer of oil. This oil does not evaporate away the way the potato moisture will, and as the oil gains energy from the hot oven air molecules, it will transfer that energy to the potato, so that the potato surface will get hotter more quickly than it would without the oil. The oil also adds to surface browning reactions to give more richness and crispness to the potatoes. Another way crispness is improved is by rinsing the excess starch from the potatoes by soaking them in cold water before coating them in oil and baking them. If the extra starch is left on, it blocks the evaporation of moisture from the potato and the result is a softer, mushier fried potato.

What kind of potato is best for frying? Well, with over 200 species of potatoes to choose from, it may seem hard to answer that question, but all these potatoes can be divided into two broad categories: mealy and waxy, based on how much starch is concentrated in their granules. Potatoes that concentrate the most starch are denser and are known as mealy potatoes. Examples are russets, Russian fingerlings, banana fingerlings, and purple varieties. When these potatoes are cooked, their cells tend to swell and separate, creating potatoes that are fluffy and dry. These varieties work well for frying, baking, and mashed potatoes. Potatoes that concentrate less starch are known as waxy potatoes (you may have heard them also described as boiling potatoes). Examples are red and white-skinned potatoes, and new potatoes. When these potatoes are cooked, their cells do not separate, so the resulting potato has a smooth, moist texture that works well in potato salads, stews, and gratins.

So now that you're a potato master (that's master, not masher), you're ready to put these ideas to the test, and see if you can get your oven to make the perfect, crispy, oven-fried potato.

Caution: Never eat any potato that is bitter, or that has a green color just below the skin, as this can indicate that the potato has built up dangerous levels of solanine, a substance that the potato produces as protection against insects, other animals, and disease.

Preparing Your Potatoes for Testing 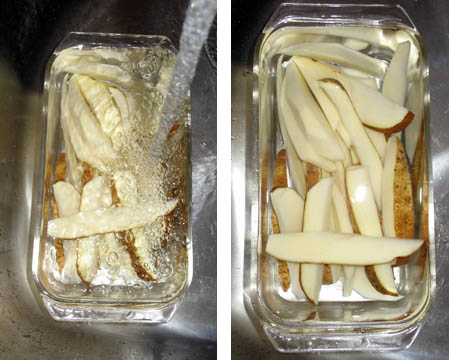 Figure 2. These photos show how to rinse and soak the potatoes without notches. 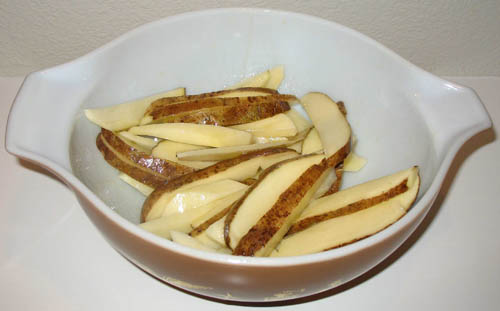 Figure 3. This photo shows the potato wedges after being dried and coated evenly with oil and salt. 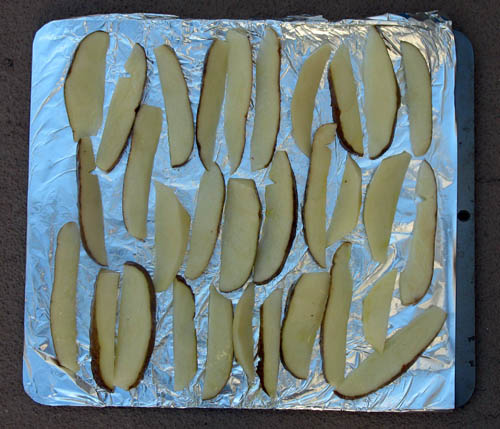 Figure 4. This photo shows all the potato wedges spread out evenly in a single layer. You can see that some of the potatoes have triangular notches and some do not.