Ask an Expert: Birds: Is agriculture positive or negative for migratory birds?

Birds: Is agriculture positive or negative for migratory birds?

Background:
For my science fair project, I took the idea from https://www.sciencebuddies.org/science-fair-projects/project-ideas/EnvSci_p057/environmental-science/saving-migratory-animals#procedure but instead of analyzing 3 tracks from 1 species, I analyzed 30 tracks from all 6 species listed so my project turned into a computer science and env science project.

The data collected shows that amongst the locations of migratory birds, agriculture was the most common feature. At first I believed this meant that agriculture was positive for birds however, this 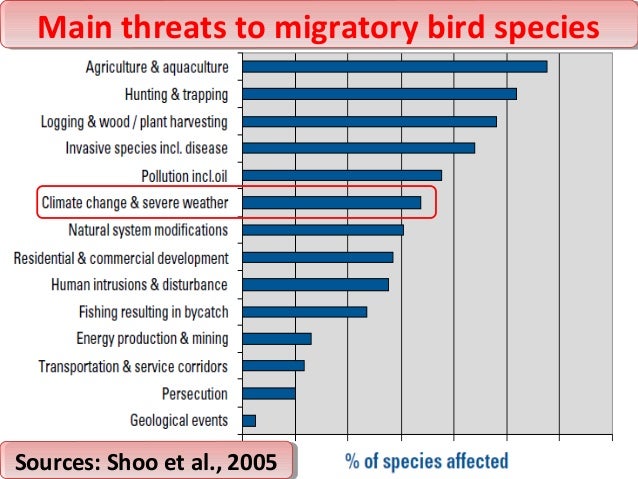 image says the exact opposite.

Question:
My question is, "Is agriculture positive or negative for migratory bird species and why?"

Thanks for the question. First, let's take a step back and ask ourselves: what do we mean when we say "positive" or "negative?"

I'm going to be completely honest, I'm not even sure myself what you mean when you use those terms. I think this is a classic case of scientific "jumping the gun," in which we've jumped to a conclusion without giving ourselves enough time to think through what the data is presenting. So let's dial back and look at the data before making cross-comparisons.

Now, I don't have access to your data analysis, nor do I want to request it - because that's your work, your intellectual property. But based on the project description and your question, it sounds like you've recognized "agriculture" as the most commonly used land type by these birds in wintering/breeding/stopover grounds. (I don't know whether it's one of those three, or some combination.)

The first thing I want to ask is: agriculture, as opposed to what? What does the rest of your pie chart say? Is the rest of it urban, or wetlands, or something else? This might be important, because it represents the options that these birds have. If they were choosing between farmland and city land, farmland generally seems to make more sense. That's different from, say, choosing between farmland and forest, or grassy hills.

Now we look at the chart you've cited. It's certainly an interesting one, and for now let's give it the benefit of the doubt and assume it is pretty much correct. (I have no evidence pointing either way, so that's what we've got for now.) What I'm noticing is that most of the items on the chart are sources of impact, mostly human impact. I have no idea what their metric for "% of birds affected" actually means, and I cannot seem to find either the original paper that is cited or whatever work this figure came from. I think it is referring to how migratory birds are being killed, though frankly with the lack of any numbers I am suspicious as to how they gathered any of this data.

Regardless, one possible interpretation of this chart is that using up land for agriculture is hurting birds in some way. The key point here is that "agriculture" does not mean the same thing in your dataset and in this chart. You refer to agriculture to talk about the specific type of land that the birds are using, whereas the chart most likely is referring to agriculture to talk about the acquisition, conversion, preparation, and otherwise modification of some natural land to use for farming. Understand that this is just my interpretation, so take it how you wish.

My point is, though, the chart argues that humans taking up natural resources and using it up for agriculture is harming migratory birds. Then, to address this fully, we have to circle back to your dataset and think about whether birds are preferring farmland over undeveloped land, or they're using farmland over even more developed urban land.

So really, when we look at it, whether "agriculture is positive or negative for migratory birds" seems like a complicated question. I'm interested to see how it plays out, but there's a couple different additional hypotheses that could arise from what we have now. Maybe the birds are using the farmland because it used to be more preferable forest territory, but it stopped being a forest. Maybe the birds are using the farmland because it's decently abundant in some resource they need, but it's still not as good as the resources a forest provides.

Whatever the case — and you probably won't be able to find the answer to the above in your project — the notion of "positive" and "negative" are just too broad for us to apply here. My personal advice would be not to worry about what the chart says, and focus on interpreting your data.

If you can't get in deeper detail, don't sweat it! This is a bit beyond the scope of your current project anyway. It's better not to come up with random speculation that has no evidence backing it, so unless you come across something in your research, don't worry. But you've raised the question for yourself, so I'm offering insight and possible paths you could take. Why are birds grounding in agricultural land? What is in farmland that is good or bad for them? Has this changed over time? Is there any other data that you can collect & analyze to help you narrow down those questions? Or maybe literature review?

Hope that helps - it got a bit rambly towards the end. Let me know if you have additional questions

I don't have full-text access because I'm off-campus for the week but I honestly can't see how this is the only citation for this graph. The emphasis is on climate change and I can see no supporting evidence for the agriculture/aquaculture part of the chart. Again, coupled with the fact that there are no numbers in the chart and I cannot find the original chart anywhere, I can't say how trustworthy this image could be.

If anyone else, like another Expert, wants to jump in with additional expertise, please feel free - but at the moment I stand by what I said. I think the best course of action is to focus on interpreting your own data first.
Top

Hi Raphiam,
I agree with the first expert that the Shoo et al 2005 reference is not reporting information about migration in the way that your project is considering migration. So that reference doesn't seem relevant to your project. If you are looking for publications to reference in your display board, let us know and maybe we can help!

Your project sounds fascinating and the first expert has given you very good suggestions.

And, like the first expert, I am curious if you recorded land use separately for breeding grounds vs wintering grounds vs stopovers? I too wonder if you can separate agriculture from forests.

Did you group all 6 species or did you also look at the results for each species? Different species might have different requirements. Showing the data separately makes extra work for you but I think your results are important and well-worth the extra time!
Top
Locked
4 posts • Page 1 of 1