Alka-Seltzer Science: The Effect of Temperature on Reaction Time

Have you ever wondered why bubbles form when an Alka-Seltzer tablet is put in water?  If you’ve ever tried it, you’ve seen that the tablet fizzes furiously when dropped into water.  The moment the tablet starts dissolving, a chemical reaction occurs that releases carbon dioxide gas.  This is what the bubbles are.  Some factors can change how quickly the carbon dioxide gas is made, and consequently affect how furiously the tablet fizzes.  In this activity you’ll explore whether you can make an Alka-Seltzer tablet fizz faster or slower by changing the temperature of the water.  How does the water’s temperature affect the reaction?

Alka-Seltzer is a medical drug that works as a pain reliever and an antacid (antacids help neutralize stomach acidity, such as heartburn).  The pain reliever used is aspirin and the antacid used is baking soda, or sodium bicarbonate.  To take the tablets, they’re fully dissolved in water, where they famously undergo a chemical reaction that produces lots of carbon dioxide bubbles.  Why is this?  As the tablets dissolve, the sodium bicarbonate splits apart to form sodium and bicarbonate ions.  The bicarbonate ions react with hydrogen ions (from citric acid, another ingredient in the tablets) to form carbon dioxide gas (and water).  This is how the bubbles are made.

Extra: You could turn this activity into a homemade lava lamp!  To do this, you will want to use a tall jar or empty clear plastic 1-liter or 2-liter bottle, fill it with about 2 inches of water, add 5 drops of food coloring, and then fill it at least three-quarters full with vegetable oil.  You could repeat this activity using your homemade lava lamp at a cold and hot temperature. (You’ll need to devise a safe way to heat or cool each container.)  You will also want to use one-quarter of an Alka-Seltzer tablet at a time (instead of a whole tablet).  How does the bicarbonate reaction look in the homemade lava lamp?

When the Alka-Seltzer tablet was added to the hot water, the tablet should have quickly dissolved, taking around 20 to 30 seconds to do so, depending on the exact temperature.  When the tablet was added to the ice-cold water, it should have taken much longer to dissolve, with most of the tablet dissolving after about two to three minutes, but with some bubbles (from the tablet’s remains) still apparent after six minutes or longer.  In the hot water, the tablet should have more vigorously produced bubbles than in the cold water.  The higher the temperature, the faster the molecules move, and the more likely it is that the bicarbonate will contact hydrogen in just the right way for the chemical reaction to occur and produce carbon dioxide bubbles.

How to Build a Brushbot 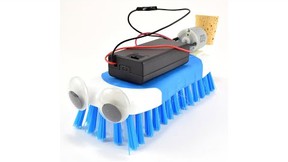 How to Build a Brushbot
Build a line following robot 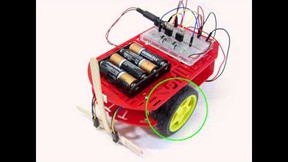 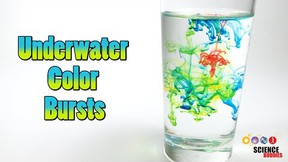