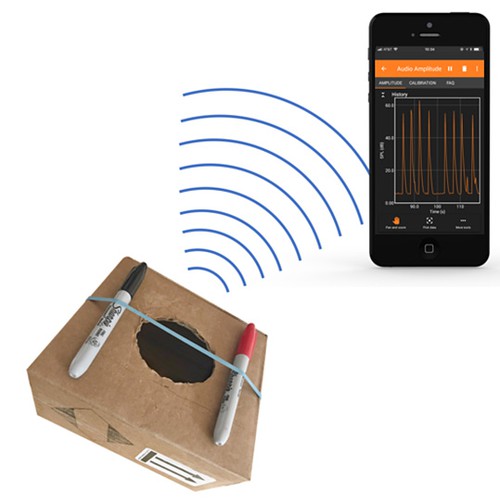 Two sharpies lie parallel to each other on either side of a hole cut into the lid of a cardboard box. A rubber band holds the sharpies in place and stretches directly over the hole in the box. When the rubber band is plucked sound is produced and is recorded on a nearby smartphone.

We are surrounded by sounds every day, ranging from unpleasant ones like traffic noise to enjoyable ones like music or singing birds. What makes these sounds different? Why are some louder or higher pitched than others? In this lesson plan, your students will investigate how the properties of a sound wave, like frequency and amplitude, affect the sounds we hear. They will do this using a sensor app than can record sound and frequency data with a mobile phone and a homemade musical instrument—a rubber band guitar! 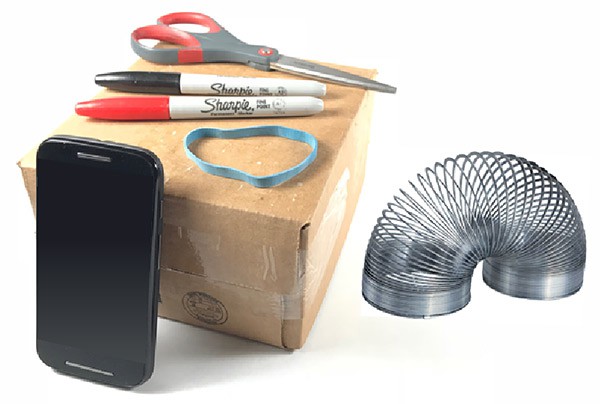 Materials per group of students:

What is sound? Sound is produced by vibrations. Musical instruments are objects specifically designed to make beautiful sounds. The key to playing an instrument is to make parts of the instrument vibrate, creating specific sounds. Drummers hit a drum to make its membrane vibrate; an oboe player blows into a reed, causing it to vibrate; and a guitar player plucks a string to make it vibrate. All these vibrations are translated into sounds that we can hear with our ears.

The energy that you put into a guitar string by plucking it travels through the string as a transverse wave. These waves are similar to those you can see in a rope that you swing up and down. Transverse waves (in contrast to longitudinal waves) are characterized by the particle motion being perpendicular to the direction of wave propagation (see Figure 1). 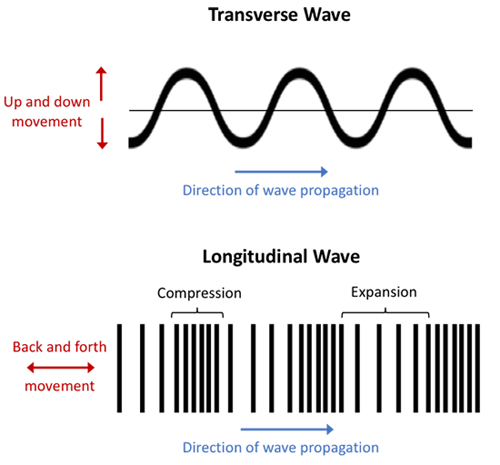 Figure 1. Diagram of a transverse wave (top) and a longitudinal wave (bottom).

However, although you might notice that a guitar string seems to vibrate back and forth in place, the wave does not appear to "travel" down the string. Since the guitar string is fixed at both ends, a transverse wave moving along the string is reflected back when it reaches the end of the string. This results in two transverse waves traveling in opposite directions that combine to form a standing wave, which appears to stand still as shown in Figure 2.

The transverse wave in the string creates another type of wave by pushing on air molecules. The vibrating motion causes alternating local compressions of the air (increases in pressure) and local rarefactions of the air (decreases in pressure), as shown in Figure 3. Since the air molecules are already in constant motion, the compressions and rarefactions are rapidly transmitted through the air as an expanding wave. This wave is called a sound wave and is a longitudinal wave (see Figures 1 and 3). In a longitudinal wave, the particles of the medium (the material through which the wave passes) move back and forth in a direction parallel to the wave. You can illustrate the compressions and rarefactions of a sound wave in a graph showing pressure versus distance or time. The sound wave in Figure 3 shows how the pressure at a single point in time changes over a distance. 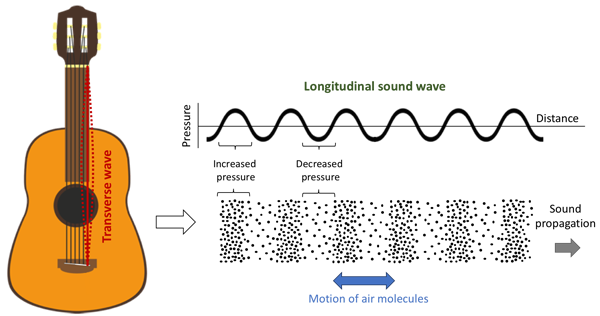 Figure 3. Transverse waves (vibrations) of a guitar string create longitudinal sound waves. The sound wave can be represented with dots showing air particles. The dots are closer together in the compressions and farther apart in rarefactions. The sound wave can also be represented using a graph with pressure on the y-axis and distance on the x-axis, where a positive y-axis value corresponds to higher pressure (compression) and a negative y-axis value corresponds to lower pressure (rarefaction). Both methods represent the wave at a single snapshot in time.

Our ears translate sound waves into sounds that we can hear when the waves reach our eardrums, as shown in Figure 4. The sound waves cause the bones in our middle ear to vibrate, and the vibrations are transmitted to fluid in our inner ear. Then, the vibrations travel to the inner ear hair cells and to the nerves that carry the signal to our brains. 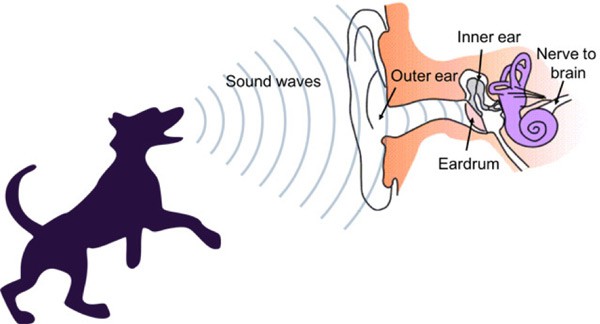 When sound waves enter a human ear they travel past the outer ear until they hit the ear drum. The ear drum vibrates air trapped in the inner ear and a nerve sends a signal to the brain which can decipher the vibrations as different sounds.


Figure 4. Our ear translates sound waves into a sound that we can hear.

This explains how we can hear sounds, but it does not explain why there are so many different sounds with various pitches and volumes. To answer this question, we have to look into the properties of transverse and longitudinal waves in more detail. One way to describe a wave is by its speed. In addition to speed, you can describe waves by their frequency, period, and amplitude. Let's start with frequency (f). The frequency of a wave describes how many cycles of the wave occur per unit of time. Frequency is measured in Hertz (Hz), which is the number of cycles per second. Figure 5 (on the left) illustrates examples of waves of two different frequencies. Note that the graphs in this figure show time on the x-axis, not distance as in Figure 3. These graphs show how the pressure at a single point in space (a fixed distance) changes over time.

Figure 5 also shows the period (T) of the wave, which is the time it takes for one complete wave to pass a given point. The period is simply the reciprocal of the frequency (T = 1/f). Finally, the amplitude of a wave is the distance from the center line to the top of the peak or the bottom of the trough and can have different units dependent on the type of the wave (e.g., for a transverse wave in a rope, this distance would be measured in meters; for a sound wave, this distance is measured in units of pressure). The amount of energy carried by a wave is proportional to the square of the amplitude of the wave. This means that if the height of the amplitude doubles, the wave will have four times the energy. You can see this when generating a transverse wave in a rope: the more you move your arms up and down, the more energy it takes, and the higher your waves will get. Even though their units are different, the amplitude of the transverse wave that creates a sound is directly related to the amplitude of the resulting sound wave.

For a sound wave, the amplitude is connected to the loudness of the sound you hear. Figure 5 (on the right) shows examples of waves with two different amplitudes. The higher the amplitude, the louder the sound. The intensity of sound is measured in decibels (dB). Figure 6 shows the decibel ratings of some common sounds. Decibels are a logarithmic scale, not a linear scale. This means that for every increase of 10 dB, the sound intensity increases by a factor of 10. For example, sound with an intensity of 40 dB is 100 times as intense as 20 dB, not twice as intense. However, while we may use the terms interchangeably in everyday speech, loudness and intensity are not the same thing. (See this link for a more detailed explanation). Most of us perceive a sound to be "twice as loud" as another one when they are about 10 dB apart. Sound levels above 80 dB can cause hearing damage over long periods of time, and sound levels above 120 dB can cause immediate damage. 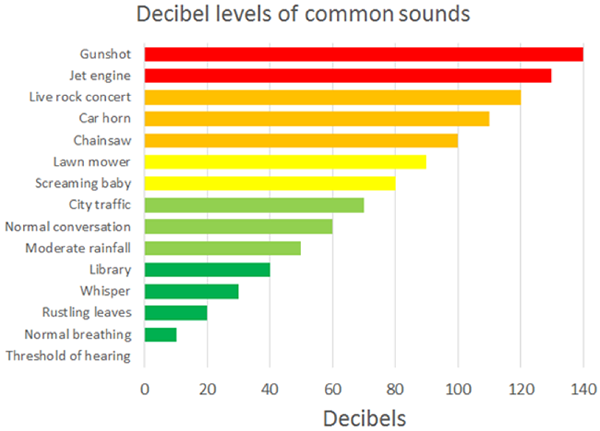 
Figure 6. Decibel levels of some common sounds. Remember that the decibel scale is nonlinear. Every increase of 10 dB corresponds to roughly doubling the perceived loudness of the sound. So, for example, a chainsaw (100 dB) does not sound twice as loud as moderate rainfall (50 dB); it sounds 32 times as loud!

In this lesson plan, your students will investigate how the frequency and amplitude of a wave are related to the pitch and volume of a sound by making music with a rubber band guitar. To do this, they will use an app on their phones, which uses sensors that are built into many smartphones, including a microphone that you can use to measure sound. The app helps your students to record and visualize the pitch and sound intensity of the sounds they create with their instruments, allowing them to discover the relationship between the properties of the sound waves and what they hear themselves.

END_OF_DOCUMENT_TOKEN_TO_BE_REPLACED 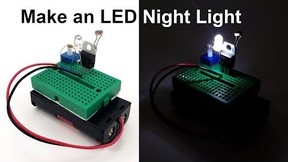