You may have seen police investigators on TV spraying a crime scene with a liquid that glows blue if there is any blood present. Luminol is the chemical which causes the glowing. In this chemistry science fair project, you will investigate what factors make this interesting molecule "light up."

Thank you to the volunteers on the Science Education Council at PPG Industries, for helpful feedback, advice and improvements on this science project. 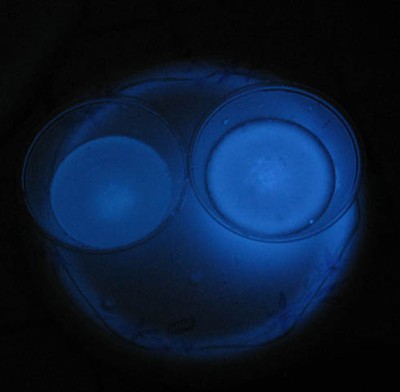 In this chemistry science fair project, you will investigate how temperature affects the eerie blue glow created by the chemical luminol.

Glow-in-the-dark objects are fascinating and mysterious. Why do they glow and where does the light come from? It seems like magic when the glow suddenly appears! There is no magic involved though, but a process called chemiluminescence. Chemiluminescent objects use chemical energy to produce light. For example, when you twist or bend a glow stick, you start a chemical reaction. One of the products of the reaction is light. The basic premise of the reaction is that the reaction between the involved chemicals releases enough energy to excite the electrons in one of the reaction partners from the ground state to the excited state, as shown in Figure 1. This causes the electrons to jump to a higher energy level and then fall back down (relax) and release light. Depending on the involved chemicals a variety of colors can be produced. 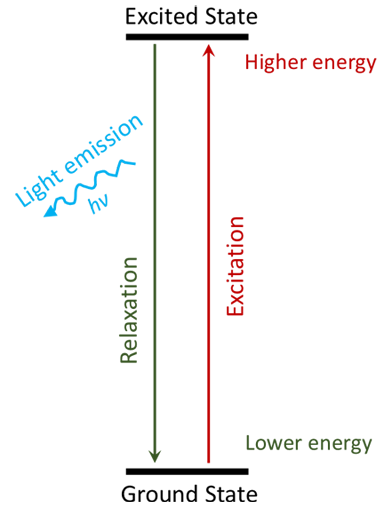 Figure 1. Simplified diagram that shows the electronic states of a molecule and the transitions between them. In a chemical reaction, electrons can be excited from the ground state to an excited state. When they relax and return to the ground state, they release their energy in the form of light.

Did you know that you can use chemiluminescence not only in glow sticks but also for solving crimes? Forensic scientists, who use science for criminal investigations, make use of chemiluminescent reactions to detect blood at crime scenes—so they can make blood visible even when it has been washed away already! When treated with a chemical called luminol, all hidden blood traces literally glow up in the dark! A demonstration of this is shown in the video below: 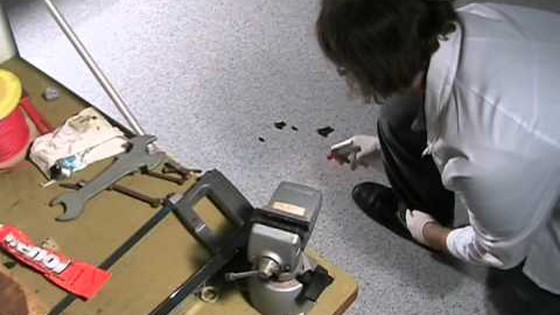 Luminol is a chemical that has the special property of emitting light when it reacts with certain other chemicals. The luminol reaction, as shown in Figure 2, is another example of chemiluminescence.

Figure 2. This is the simplified reaction mechanism for the production of light by luminol. The luminol molecule reacts with hydroxide molecules (OH-) to form the dianion (two negative charges). The dianion, which exists in two forms (the two-way arrow), reacts with oxygen to form 5-aminophthalic acid and nitrogen gas (N2). The electrons in the 5-aminophthalic acid are in an unstable, excited state. When the electrons return to their normal ground state, they release a photon of blue light.

To exhibit its luminescence, the luminol must first be activated. Usually the activator is a solution of hydrogen peroxide (H2O2) and sodium hydroxide (NaOH) in water. When luminol reacts with the hydroxide ion (OH-), a dianion is formed. A charged molecule or atom is called an ion. A molecule that has a negative charge is called an anion. And a dianion is an anion with two negative charges. The most important step in this reaction is the oxidation of luminol with oxygen, which results in the excited state dianion. The oxygen is usually formed from hydrogen peroxide (H2O2), that is added to the reaction solution. In an aqueous solution, hydrogen peroxide can decompose to produce oxygen according to the reaction below (Figure 3).

However, this reaction proceeds very slowly. Chemical reactions can be sped up by using catalysts, which are chemicals that increase the speed of a reaction but are not actually consumed. This is where the blood comes into play! The reason why the luminol reaction makes blood glow is that it detects the iron that is present in hemoglobin, an iron-containing oxygen-transport metalloprotein in our red blood cells. This iron functions as a catalyst to speed up the production of oxygen. You can replace the hydrogen peroxide in this reaction with other oxidizing chemicals such as sodium perborate, which will release hydrogen peroxide in water according to the reaction below (Figure 4).

The oxygen produced from the hydrogen peroxide then reacts with the luminol dianion. The product of this reaction is very unstable and immediately decomposes with the loss of nitrogen to produce 5-aminophthalic acid. The electrons in the 5-aminophthalic acid produced by this reaction are in an excited state. Electrons in an excited state are in a higher energy level. As the excited state relaxes to the ground state, the excess energy is liberated as a photon, which is then visible as blue light.

All that a crime scene investigator has to do is to prepare a solution of luminol, sodium hydroxide (which provides the hydroxide ions for the first step of the reaction), and hydrogen peroxide and spray it throughout the area under investigation. The iron present in any blood in the area catalyzes the chemical reaction, which leads to the luminescence, revealing the location of the blood. The amount of catalyst necessary for the reaction to occur is very small, relative to the amount of luminol, allowing the detection of even trace amounts of blood. The glow lasts for about 30 seconds and is blue. Detecting the glow requires a fairly dark room. Any detected glow may be documented by a long-exposure photograph or by videotape.

In this chemistry science fair project, you will explore the luminol reaction and investigate how the solution temperature can affect the glow. In every chemical reaction, the temperature can affect how the reaction proceeds. Do you think a crime scene investigator will get the same glow from blood traces in a car during a snowy winter compared to the same car in the middle of a hot summer? You will find out in this science project with the help of a kit called the "Cool Blue Light Experiment Kit" that you can order online. Note that this kit uses perborate as the oxidizer instead of hydrogen peroxide. And don't worry, there will be no blood involved in this project— you will use copper sulfate (CuSO4) as an alternative catalyst that works just as well as real blood!

Setting Up Your Materials

Note: The blue light made by the luminol reaction is best viewed in a dimly lit room. You might want to perform the experiments in a location where you can shut out surrounding light by closing the door. You will use a digital camera to capture the luminol glow. 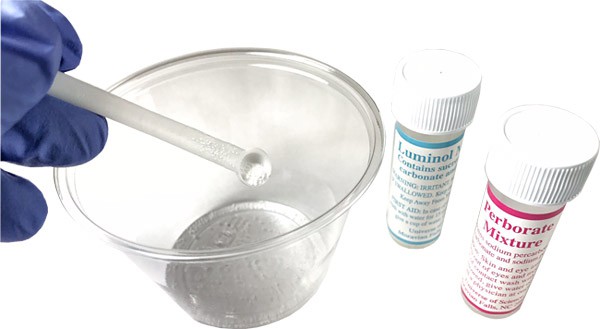 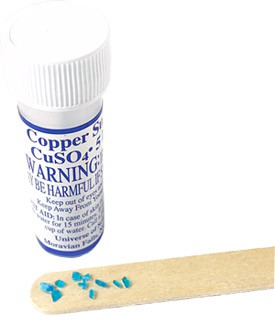 Figure 6. Use a defined amount of copper sulfate crystals for each reaction. 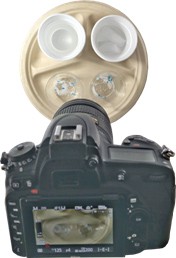 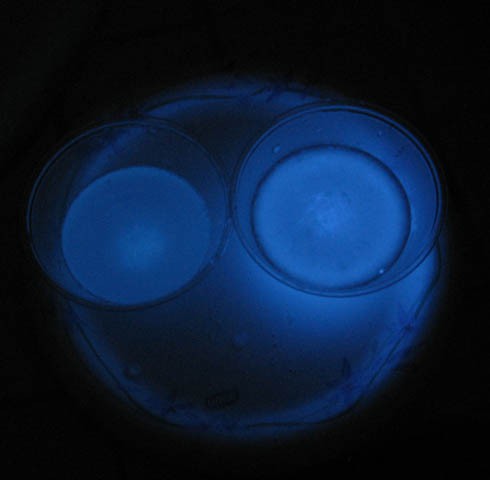 Figure 8. Two luminol reactions at different temperatures. The picture was taken with an f-stop of 8 and an exposure time 10 seconds. The reaction was started 20 seconds prior to taking the picture.

Figure 9. Once you added the water make sure to mix the solution.

In order to graph your results, create a scale for the brightness of the light in the cups. 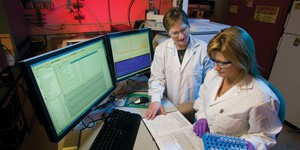 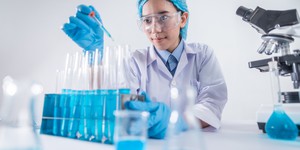 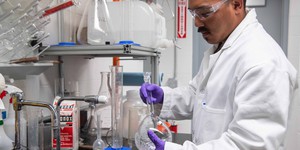 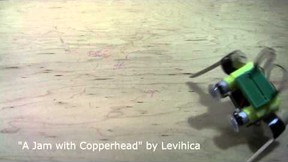 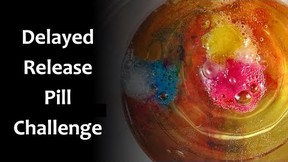