It's the bottom of the ninth, and you've spent a great afternoon at the ball game with a hotdog, a soda, and an ice cream in hand, but I'll bet you're not thinking about how many crops went into those classic baseball snacks. Sure, the bun contains wheat, but did you know that the hotdog might contain wheat, too? And soybeans may have been used to give that ice cream its perfectly smooth texture, while corn was likely used to sweeten the entire meal! Crops can be changed and added to processed foods to improve their taste and texture. In this cooking and food science fair project, you'll find out which crops are used most often in processed foods. Get ready to discover some sweet and savory secrets!

To determine which crops are found most often in processed foods.

Imagine Old Mother Hubbard is going to her cupboard... not to get her poor dog a bone, but to get her children some dinner! Her kids ask her what she is going to make, and she grabs a can and tells them, "We're having baked beans tonight," but then her son looks at the label on the can and says, "We're also having corn, wheat, and soy with those beans." What's going on? Is Old Mother Hubbard's son correct?

Baked beans, and thousands of other foods you find in grocery stores, are called processed foods. Processed means that the foods have been changed in some way from their raw states. Processing includes things like cooking, canning, freezing, dehydrating, or milling. So, for example, if you pick a strawberry, wash it, cut off its stem, and then quickly freeze it and seal it in a bag, you have "processed" that strawberry. Or if you cut down stalks of wheat, thresh them to separate the heads of the stalks (the part people eat) from the straw (the part cows eat), and then separate out the wheat berries in the head and grind parts of those into flour, and finally, mix that flour with water and salt and bake it, you have "processed" the wheat and made yummy pita bread!

Why do people process food? One reason is to preserve the food—to make it last longer. People have been preserving food with salt, as well as with drying and smoking methods, for thousands of years. The ancient Inca, for example, were one of the first peoples to learn the art of freeze-drying, high in the cold mountains of Peru. While the French were the first to figure out how to can food in glass jars in the early 1800's, thanks to a contest set up by Emperor Napoleon, who was trying to figure out a better way to feed his army. Preserving food is very important, because it ensures that people have food to eat during the colder seasons when many crops do not grow. 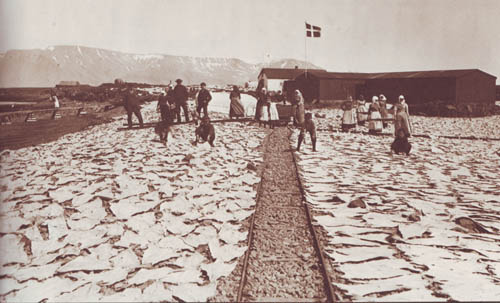 Figure 1. This photo shows adults and children in Iceland in the 1800's, drying pieces of salt cod, a type of fish, in the sun and wind. This is an example of food processing as a form of preservation. (Wikimedia, 2007.)

Another reason foods are processed is for safety. Pasteurizing milk or juice, for example, kills bacteria in the raw milk or juice, that could cause illness.

Processing foods also makes them more convenient. Many processed foods, like chips, crackers, canned soups, juice boxes, and frozen dinners, are "ready-to-eat" or quick to prepare, requiring only warming or opening of the packaging.

Processing of foods is also done to encourage people to eat them. Adding salt, sweeteners, or fats to a food often makes people want to eat more of it. Adding flavor enhancers, like monosodium glutamate (MSG), can make foods more savory. Adding thickeners to a food can create tasty sauces. Sometimes just changing the color or texture of a food through processing can make people want to eat more of it, too.

Some additions or texture changes to food are accomplished by adding one or more foods from the grass or legume (bean) families of plants. Besides sugar cane and bamboo, the main edible grasses are the cereal grains—crops like corn, wheat, rice, barley, and oats. Common legume crops are soybeans, peanuts, garbanzo beans, lentils, and peas. During food processing, these crops may be used as a main ingredient, or as a food additive, to change the taste, texture, or appearance of the main food. In the Bibliography, you will find a full list of all the ways in which food additives are used.

Often, food additives are first modified (changed) before they are added to the main food. For example, a common sweetener used in many processed foods and drinks, like cookies and soda, is high-fructose corn syrup. The syrup is obtained by modifying corn, a plant in the grass family. To get the syrup, the corn is first milled into corn starch, then that corn starch is mixed with special proteins called enzymes, which change the starch into high-fructose corn syrup.

In this food science fair project, you'll look at food labels to discover the most common hidden crops in processed foods. Is there corn going undercover in your crackers? Wheat waiting to be found in your hotdogs? Soybeans slipping through your ice cream? Head off to the grocery store to find out!

These sources discuss what processed foods are, and describe some of their advantages and disadvantages:

This source describes why food additives are used in processed foods:

Note: To do this experiment, you will need to visit a grocery store and spend at least an hour there. You will not be making any purchases—at least not for this science fair project!

Ever wondered who plans the school lunch, food for patients at a hospital, or the meals for athletes at the Olympics? The answer is dietitians and nutritionists! A dietitian or nutritionist's job is to supervise the planning and preparation of meals to ensure that people—like students, patients, and athletes—are getting the right foods to make them as healthy and as strong as possible. Some dietitians and nutritionists also work to educate people about good food choices so they can cook and eat their own healthy meals. Read more