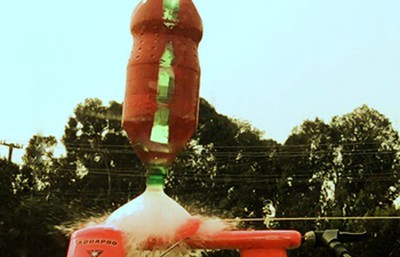 Initially, while the bottle rocket expels water (or the rocket expels exhaust), the rocket gets a boost. This push is referred to as thrust and projects the rocket forward. Earth's gravity pulls the rocket down, and air resistance or drag works against the movement of the rocket. The typical path of a bottle rocket consists of an initial boost after which the rocket coasts to its highest point (the apogee). It ends with a steady descent. As you change the rocket or the launch procedure, think about which forces that act on the rocket (thrust, gravity, and drag) change, and how these changes will influence the path the rocket takes.

Some items you can consider changing are:

Electronic sensors, like an accelerometer (which measures acceleration) or an altimeter (which measures the rocket's altitude by measuring barometric pressure) provide measurements about the flight path. Some sensors may continuously log data throughout the entire flight, producing detailed information of how altitude, speed, and acceleration change over time. Other sensors record certain values that characterize a flight. Below are a few parameters that might be provided by a sensor, and what they mean. 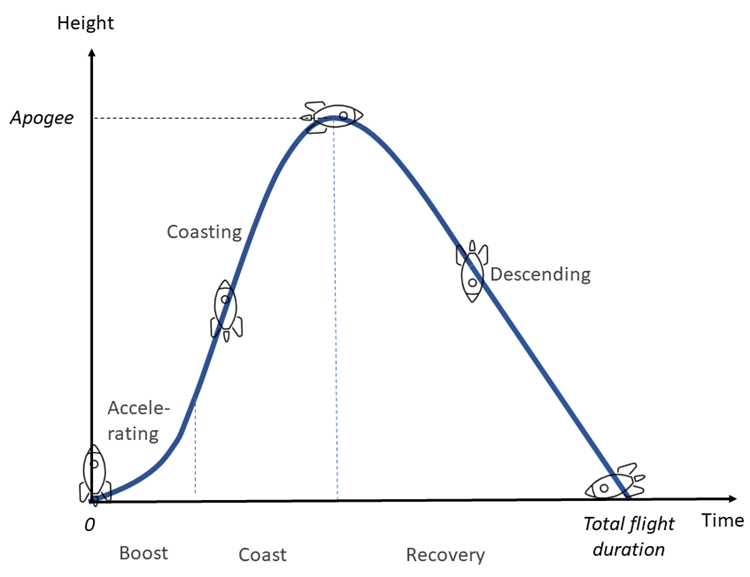 If you start the time period at 0, the rocket will climb rapidly during the boost, or the period where the rocket accelerates. The rocket rises steadily as it coasts to the apogee and has a steady decline as it descends to height 0. The period between reaching the apogee and the touchdown is called the recovery period.


Figure 1. A typical height versus time diagram of a rocket launch

The AltimeterTwo from Jolly Logic is an example of a sensor that records a list of rocket path parameters. It provides easy access to a few essential parameters that describe a rocket's performance. Choose one or a few of these parameters to analyze.

If your meter provides graphs of altitude vs. time as shown in Figure 3, do some research about how these display the maximum altitude, the boost period, the maximum acceleration, etc. Then, choose one or a few of these parameters to analyze. 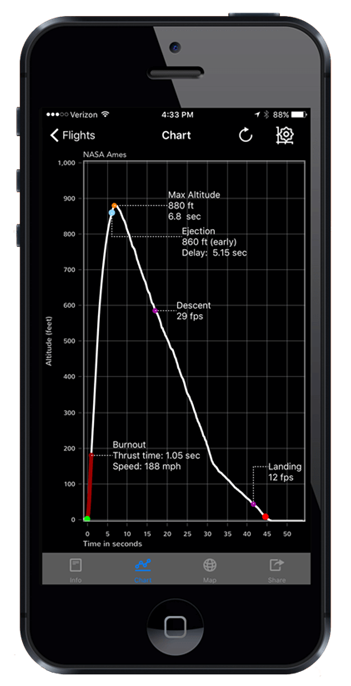 To understand the measured acceleration, it is good to know Newton's second law of motion, which states that if the same force is applied to a heavier rocket, the rocket will accelerate less. Or, keeping the mass of the rocket (and thus also the water level in the bottle rocket at launch) unchanged, one can use the average acceleration during boost as a measure of the force created by the thrust, gravity, and drag combined during boost.

When using an electronic sensor on a rocket, remember to attach it well. These sensors are small and hard to find when they detach during flight. Most of these sensors are not water-resistant. Be sure to pack it in plastic wrap to protect it from moisture or water spills. Because an altimeter measures air pressure to determine elevation changes, it will not give accurate readings if you pack it in an airtight container or bag.

Note that bottle rockets can be used to test parachutes, but because they do not use an ejection system to release the parachute, the ejection time or altitude at ejection (two parameters that might be provided by a sensor) will not be correct. However, you can study how the duration of the descent, or average speed of the descent changes when using a parachute.

Remember, you can either use the scientific method—changing one variable at a time and studying its influence on the flight path—or the engineering design method, where you aim to design a rocket that fulfills preset criteria. 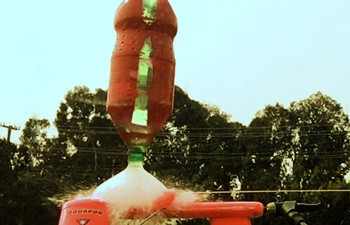 If you are having trouble with this project, please read the FAQ below. You may find the answer to your question.
Q: If your rocket launches prematurely (e.g. while you are using the bike pump to add air):
A:
Q: If your rocket stays stuck on the launcher:
A: 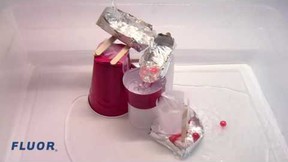 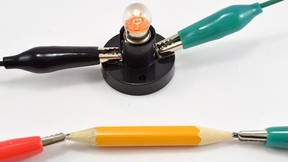 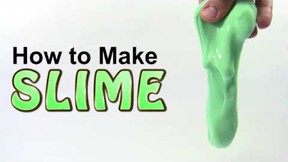