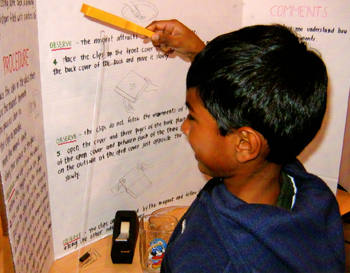 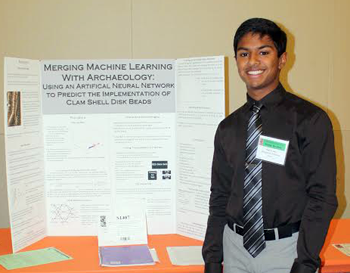 Above: Ram Goli, winner of the 2016 Mardigian Scholarship from Bio-Rad, with project display boards from 3rd and 11th grade.

Each year, Bio-Rad awards the Ron Mardigian Scholarship to a graduating high school senior who plans to pursue a career in science. The winning student's essay is then posted at Science Buddies. It is inspiring to see such dedication, such hope and optimism, and such determination in these students as they exit high school and move on to next steps on a path grounded in an interest in science, technology, engineering, and math (STEM).

Always, the winners write poignantly about the importance of hands-on science, the guiding premise behind Science Buddies. Sometimes the winners recall pivotal moments in their own education that transformed their view of science. Sometimes winners talk about the importance of hands-on science exploration being included in schools. Sometimes, winners talk passionately about hands-on science or research projects they have done that have fed their interests and ambitions. This year's winning essay reminds readers of the powerful connection personal and family history can have to a student's passion for STEM. For this student, a sibling's medical struggles gave clarity to his interest in medical and bioengineering.

This year's Ron Mardigian Scholarship winner is Ram Goli. Ram graduated as valedictorian of Casa Grande High School (CA) and is now attending school at UCLA, where he plans to study computer science and electrical engineering.

Ram is no stranger to hands-on science, and he was fortunate to have science project opportunities throughout elementary, middle, and high school. "My first experience with science fairs came during my kindergarten year in elementary school when I created rainbows in bowls of water using a flashlight," recalls Ram. Spurred on by that first science fair, Ram continued to do projects for the annual school science fair. "Some of my elementary school science projects included building a quiz game with circuits and light bulbs and making a mini jet engine in a jam jar." Ram's middle and high schools did not hold their own science fairs, so Ram entered projects in the county fair. "Often I entered as the only student from my school that year participating," notes Ram.

He may have been the only one, but he didn't let it stop him. "My most recent project was one I completed in the 11th grade, where I worked with a local archaeologist to program a machine learning algorithm that could predict the original function of California clam shell beads," says Ram. "This was definitely one of my favorite projects, as it allowed me to combine two unique fields of study." Ram went all the way to the California State Science Fair with the project.

With an uncanny big picture view, Ram writes eloquently about what it means to be a young scientist on the cusp of the 21st century. "What excites me the most about science is that nothing is ever fixed. Science seems to be one of those phenomena that is always in motion; what we thought was true today may not be true tomorrow, and what may work well today may work even better tomorrow. The tools of science, like observation, experimentation, etc., make it so that we are always building upon our current skills and knowledge and improving them for the next generation. Sometimes I wonder if everything worth discovering has already been discovered, and if science today is just not as revolutionary and exciting as it used to be. But then I remind myself that 'science' is, in fact, constantly evolving. Einstein reimagined the whole concept of space-time only 100 years ago! Every year, engineers are able to fit more and more transistors onto a computer chip and further increase speed of computation. Companies like Google and Tesla are coming closer to perfecting the self-driving car every day. Last summer, I was able to intern with a lymphoma therapy research project where in just 8 weeks we were able to improve upon the process of synthesizing proteins that may be valuable to future lymphoma patients."

A Maker at Heart

In addition to participating in the yearly science fair, Ram has a history of doing engineering and maker-inspired projects. Like many engineers, Ram spent time as a kid taking things apart and putting them back together to learn how they work. Ram is a self-defined Maker, but his interest in engineering really took shape when he realized he could use his fascination with taking things apart, improving things, or making new things to create things with real-world impact.

His projects have shifted over the years from putting faster motors in radio-controlled cars and building potato cannons to computer programming and using Arduino microprocessors to control electronic devices. "As a Maker, I think that I find the most rewarding part of the process to be building things that can actually be of use and can make my life easier," says Ram. "My favorite definition of a Maker is someone who can take something ordinary and turn it into something extraordinary, and thus I try to reimagine ways that basic things I may use daily can be turned into something better. Utilizing the things that I've made is such a fulfilling experience, and I hope to continue making things that will be of benefit to many more people in my future."

In his essay, Ram writes about his personal interest in engineering and how that interest was sparked by an eye problem his younger brother had when Ram was a child. That passion and personal connection has continued to fuel Ram's plans. "I have dreams of becoming a biomedical engineer and maybe even working on intelligent, autonomous human aid devices. Creating artificially intelligent machines that can provide people with immediate health services, and keep people around the world connected to a doctor even from remote locations, is a huge goal of mine."

In addition to science and engineering, Ram says he enjoys playing tennis and Ultimate Frisbee, playing trumpet and piano, and hiking, biking, and exploring new trails and parks on the weekends.

The full text of Ram's winning essay appears below.

I am a Maker, caught in the act.

It's all in the act itself. Making is my meditation, and like the mystic snake charmers of Southeast India, urging their creatures up and about with wild flourishes of sound, I have come to master the tools I work with. I often reminisce about myself as a six-year-old again, sitting cross-legged on the garage floor, with parts of yet another Lego creation lying all over the carpet. I gazed at the plastic cubes with indifference—tinkering kept me occupied, that's all. The sight of the screwdrivers and hammers hanging precariously off of the walls, broken remote-controlled cars and deceased computers lying in the corner, caught my eye. Everywhere I looked, I saw the potential, but never the purpose. I made things, but lacked the insight to know for what. The process was all that mattered; my 'making' had no motives.

I recall finding those first motives sitting idly in the medical treatment room for the first time, looking with apprehension at all the 'tools' that populated the small room. The heart-rate monitor flashed with a steady, rhythmic pulse; the IV-machine expelled fluids through a mesh of tubes and wires; the bag of chemotherapy mercilessly emptied itself into my brother's arm. I took another look around the room, and for an instant felt as if I was sitting in my garage again—everywhere, there were equipment and devices carefully dispersed. Amid ripples of anxiety, I found myself wondering not just how they all work, but what they are all for.

My six-month-old brother was given the three-pronged spear to treat his retinoblastoma, the tumor that grew on his eye, for two long years: chemotherapy, radiation, and laser therapy. And on that first day of treatment, I felt distraught; growing up, my sight was my Muse, my divine stimulus. I cherished my ability to simply look at things for hours, to seek out the gaps and crevices, and begin thinking and building. I'll admit, I never looked to fashion something practical out of all the lumber and wires spewed across our garage floor. I had never pondered how science and engineering were in fact aiding people in need around the world. I created simply for creativity's sake, and I wanted my brother to do the same.

Following two years of auspicious treatment, a feeling of value and purpose grew right out of all those machines—from the flashing lights, to the calm, mechanical purr. On his last day of treatment, I had come to understand not only the inner turning of gears and motors, the binary signals rushing down infinite pathways, but the reason behind them all. Someone had the insight and determination to make machinery that had value, and that impacted our lives. These innovations were succoring the lives of similar patients across the country and globe. My brother's tumor was soon erased, I had come to find my purpose, and my for what, at long last, was uncovered. Tinkering for the thrill of it is no longer enough; the six-year-old me would have been wholly satisfied, but not now. Science helped my brother retain two healthy eyes, and I will never lose sight of that. To see my innovations having an impact, to see the seedlings of science burgeon into solutions to unique health problems—this is my motive to make. This is what science can do for our world today.


My favorite definition of a Maker is someone who can take something ordinary and turn it into something extraordinary, and thus I try to reimagine ways that basic things I may use daily can be turned into something better. ~Ram Goli

Thank you to Ram Goli for sharing his essay and story with the Science Buddies community. 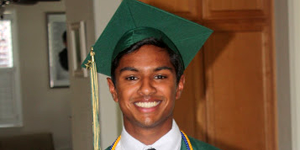 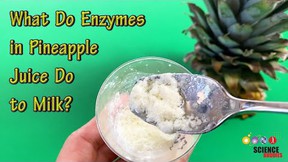