My favorite project of recent ones I've worked on is the Science Buddies project, No Pain, Lots of Game, a project that looks at the relationship between video gaming and pain management.

This project grew out of personal experience with my oldest daughter. When she was five years old, we discovered that she had a birth defect requiring chest and abdominal surgery. During her hospital stay, her pain was managed primarily with morphine, but during painful procedures, the surgeon advised us to put on a movie and to get her engaged in that before starting the procedure. During her months of recovery at home, my daughter would often wake up in pain, and again I used a combination of medication and videos to help her get through the night.

In 2008, when Science Buddies opened up a new interest area section on computer and video games, I wondered if any research was being done on using computer or video games to manage pain. I learned that indeed, throughout the country, studies are being done to see if video games and virtual reality games like Snow World can help alleviate pain in patients suffering from burns. Burn units were chosen for these studies because burns are some of the most painful kinds of injuries that people must endure, sometimes requiring months of daily wound care. I decided to try and write a science fair project for students that would parallel this real-world research.

Putting It All Together 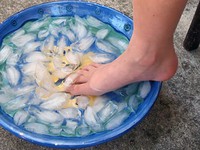 An "ice bath" was used to create a painful circumstance for volunteers. We were then able to test to see if playing a video game helped reduce awareness of pain (or increase the ability to withstand and block pain).

The question that we're trying to answer with this video game science fair project is: Can video games be included in the repertoire of pain management strategies?

To try and answer this question, I decided to use an "ice bath" as a way to create pain without causing lasting injury. To test the project, brave volunteers were seated in a chair and asked to put the front part of one foot in the ice water, a situation that is uncomfortable and "painful." We asked each volunteer to leave his or her foot in as long as possible, and we measured and recorded the amount of time.

To test our theory about video games, we then had each volunteer play a video or computer game for 5 min, and, while the volunteer continued to play the game, the other forefoot was submerged in ice water for as long as the volunteer could stand that.
The data was then analyzed to see if the video games made a difference in how long the volunteers were able to endure the ice bath.

I like this project because it can be done with things that many families have on hand, like ice, bowls, a stopwatch or way to count seconds, and computer or video games. In just a few minutes, you can set up an experiment that parallels research being done at big universities and medical schools. I think students will find it interesting to discover that there is great individual variation in sensitivity to pain—and in the ability of games to reduce or "dial down" pain.

Plus, there's a lot of room to extend and customize this project. One variation to the main project is to test various types of games to see if the "kind" of game or media source alters the outcome. Is Donkey Kong better than Dragon Warrior for helping block pain? Is TV just as good as a video game?

With an ice water bath and some brave volunteers, kids can find out. 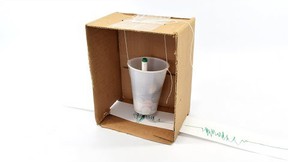