Now within twenty miles of its target comet, the Rosetta spacecraft may help provide information about the formation of the solar system and planet Earth. Students and classes can join scientists in the next year of Rosetta watching and, along the way, explore comets and space science through hands-on science projects. 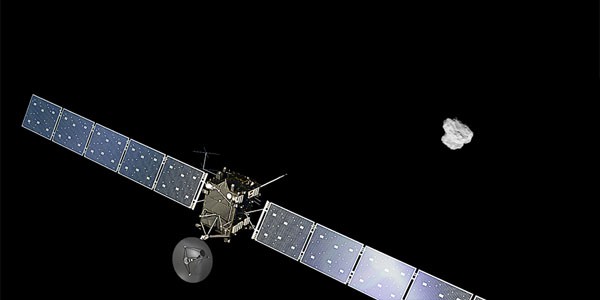 Above: A rendering (not to scale) of the Rosetta Satellite arriving at Comet 67P. Photo: Spacecraft: ESA/ATG medialab; Comet image: ESA/Rosetta/NAVCAM.

When it comes to space science and astronomy science projects, things don't always move at light speed other than in the movies. Instead, some experiments, observations, and projects involving space take meticulous planning and possibly years of waiting and tracking before the end goal comes into sight or alignment.

Last month, the European Space Agency's (ESA) Rosetta spacecraft finally arrived at its destination—a rendezvous with the Churyumov-Gerasimenko Comet (Comet 67P). Launched in 2004, the Rosetta craft traveled for ten years, two of which it spent in hibernation to conserve energy, before pulling up alongside Comet 67P. Already spanning a decade, the mission has been an exercise in advance planning and a feat that required countless calculations, trajectory plans, and even multiple slingshot maneuvers from Earth's gravitational field.

In its final few months of approach, the ESA reports that Rosetta went through a series of ten rendezvous maneuvers to tweak the craft's trajectory and speed. Every adjustment had to be right on target for the Rosetta to successfully intersect with Comet 67P.

In a statement released by the ESA on August 6, 2014, Jean-Jacques Dordain, the Director General of the ESA, announced, "After ten years, five months and four days travelling towards our destination, looping around the Sun five times and clocking up 6.4 billion kilometres, we are delighted to announce finally 'we are here.'"

Reaching the comet and pulling up within range of its orbital path was a pivotal step for the Rosetta spacecraft mission—a make-or-break moment in the mission—but the Rosetta has still not completely locked itself into place. Flying a triangular shape near the comet, Rosetta will continue to get closer to Comet 67P until it is close enough to be pulled in by the gravitational force of Comet 67P, which sources say should happen when Rosetta reaches a distance of 6.2 miles from the comet.

As it hovers near Comet 67P, Rosetta will be mapping the comet's gravitational field and surface and scouting a location for dropping a lander onto the surface of the comet in November. Already, the Rosetta spacecraft has begun capturing close-up images of the comet, giving astronomers and scientists an unprecedented up-close look at the surface of a comet.

Closing In on New Answers

Comets, made up of ice and dust, are frozen vestiges of the formation of the solar system, and scientists are hoping that Rosetta will be able to help provide information and data to solve one of the oldest unanswered questions about the Earth—where did the water in the oceans on Earth come from? That comets are responsible for the oceans is one theory, and scientists are hoping Rosetta may be able to provide answers.

A decade after liftoff, Rosetta is finally in position and primed for the final and pivotal year of its mission. As Rosetta moves ever-closer to Comet 67P and, in November, drops its landing module, students and the science community alike will be eagerly watching to see what Rosetta discovers.

Unlike members of the Rosetta team, students don't have ten years to plan and execute their science projects. For students interested in space science, the simple reality that space is "out there" can make it challenging to conduct a physical experiment. 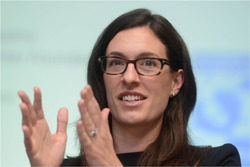 A Career in Space Science and Engineering

Students interested in space science and astrophysics can learn more about possible STEM career paths in this interview with Blake Bullock, Civil Air and Space Director for Northrop Grumman Aerospace Systems. Trained first as an astrophysicist, Blake says her job lets her spend time thinking "about the future of science, technology, and aerospace innovation."

Space is a long way away! As a result, when it comes to student space science, many projects are data-driven projects which let students delve into an astronomy question, form a hypothesis, and then analyze publicly-available data sets to draw conclusions. Examples of projects like this include: Asteroid Mining: Gold Rush in Space?, NASA Asteroid Database: What Can You Learn About Our Solar System?, Sunspot Cycles, Correlation of Coronal Mass Ejections with the Solar Sunspot Cycle, Finding the Center of the Milky Way Galaxy Using Globular Star Clusters, and The Milky Way and Beyond: Globular Clusters.

These kinds of data-driven investigations can be exciting for students and offer a taste of the kinds of real-world data analysis that many space scientists do. When possible, however, and especially for students in lower grades, hands-on projects that bring space science questions to life through everyday materials, models, and simulations may more effectively capture the attention of students with an emerging interest in space science.

Inspired by the school science project of Ashleigh (profiled in the Galactic Curiosity: Fifth Grade Student Charts a Science Course for the Stars story), the new Satellite Science: How Does Speed Affect Orbiting Altitude? astronomy project guides students in exploring, using cookie sheets and a variation of marble painting, the relationship between satellites and the gravitational pull of the object they orbit.

Tasked with the need for a tangible simulation to meet her school fair requirements, Ashleigh innovated an experiment to test questions she had about the Cassini satellite and Jupiter. In the new astronomy Science Buddies project based on Ashleigh's experiment, students set up and utilize a model to explore questions about the trajectory of satellites as they revolve around planets. With a homemade satellite launcher made from cardboard tubing, students put their model satellites into orbit and study the paint trails that mark different trajectories created by different simulations of gravitational pull.

Above: the homemade satellite launcher used in the Satellite Science astronomy project.

Students can learn more about comets and satellites in the following Science Buddies Project Ideas: 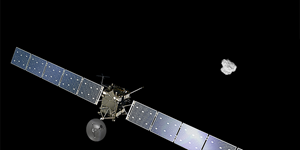 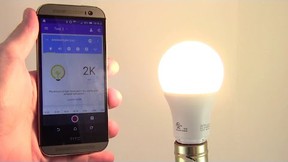