A team from Canada captures a longstanding prize with their human-powered helicopter. You won't be parking yours any time soon, but the story is an inspiring example of engineering design, innovation, and perseverance.

(1989) immediately to mind. Kiki has always been a favorite of the Hayao Miyazaki movies in my house, but the character obsessed with getting his bicycle to serve as a means of flight hasn't ever been a focus for us. The title character, after all, flies by broom! But as I read a news story from the Ottawa Citizen this morning, an image of that character, Tombo, furiously pedaling his bike through the seaside town in the movie, immediately came to mind.

His bicycle had two wheels though.

Just last week, the Kickstarter-backed AeroVelo team from Toronto officially won the AHS Igor I. Sikorsky Human Powered Helicopter Competition. The competition was established in 1980 to challenge engineers to push the limits of what is possible, and for more than thirty years, teams have been chasing the prize and a dream of human-powered flight.

More than a year's worth of engineering—and pedaling—paid off for the AeroVelo team after they successfully pedaled their human-powered helicopter, Atlas, for a sustained flight of just seconds more than the one minute requirement and just above the necessary three meters off the ground and walked away with the $250,000 prize. (The winning flight took place in June 2013. It took almost a month for analysis and verification of the data by the American Helicopter Society before the win was confirmed.)

Before you start reshaping your vision of the future as one traversed by flying bicycles, you will want to watch the team's video to take in the sheer size and intricacy of their design. Be sure and note, too, the discussion in this video interview of how easily things can "go wrong" even in mid-air. The team apparently suffered two serious crashes during the year of testing. Beyond maintenance requirements—and the risk of the helicopter falling apart unexpectedly—there is a reality to the physical energy and stamina needed to sustain flight. This is certainly transport for only the fittest of travelers!

Even so, the story of Atlas is impressive and inspiring. It is hard, in fact, to watch the video and view photos of their testing and design and not think about Da Vinci's notebooks and drawings. With Atlas, the AeroVelo team has given proof of concept to something many believed impossible.

In Pursuit of Innovation

How would you start tackling a challenge like human-powered flight? The Engineering Design Process offers a set of steps that can help you start with an idea, track through the stages of thinking and problem-solving to come up with a design to test, and then prototype, test, and tweak, as many times as needed, as you work toward an end product that meets the need or goal.

In their own coverage of the award-winning flight, the AeroVelo team writes, "The Atlas as flown on June 13th behaved very differently from the aircraft we first flew some 9 months ago, a result of many incremental improvements and changes."

Incremental is a key word there. In engineering design, improvement is often achieved additively, in small steps, sometimes one at a time. This approach lets engineers target specific problems or weaknesses, making design changes to improve certain aspects of the prototype and then verifying the effects of those changes through testing.

In a Popular Mechanics story about the Atlas' path to victory, Jeff Wise summarizes the team's year of testing: "Time and again they crashed and rebuilt. Time and again they waited on tenterhooks while Gamera came agonizingly close to winning, or set up the machine, tuned it, and got it running, only to have to break it down again so that amateur soccer teams could use the playing field. They kept adjusting and modifying the airframe for greater stiffness, stability, and performance. Finally, incredibly, it all came together."

That... is the engineering design process in action.

You can find out more about the project and their vision in the "Ingredients for Innovation" TEDx talk (April 2013) by AeroVelo founders Todd Reichert and Cameron Robertson.

For students interested in, and excited by, the story of the Atlas human-powered helicopter, the following Science Buddies Project Ideas shed light on some of the aerodynamics design and engineering principles that may factor into the process:

More Than One Approach

The Atlas design is only one way to approach the human-powered helicopter challenge. The Gamera, engineered by students at the University of Maryland, looks very different, though pedaling is still at the core of the system. See this article from last year for an overview of Gamera's development.

What approach would you take? 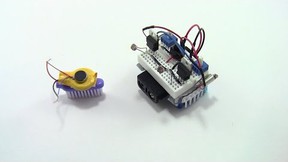