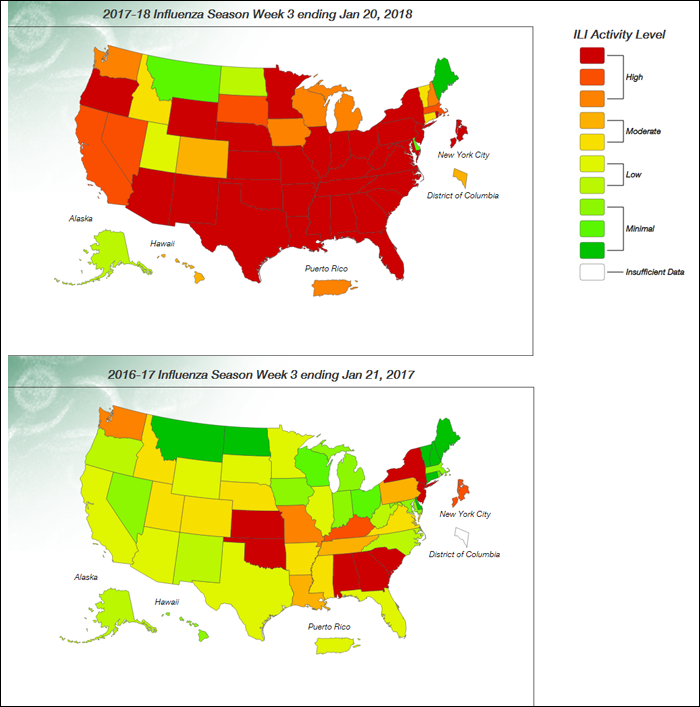 We are approximately midway into this year's flu season, and it is stacking up to be the most severe in several years in the United States. In a recent CDC Update (Jan 20, 2018), Dr. Dan Jernigan, Director of the CDC's influenza division, confirmed that the 2017-2018 flu season is similar in severity to the 2014-2015 season. Dr. Jernigan also noted that incidence of the flu has been high across the country simultaneously this year, which is different than in years past when outbreaks spread across the country, different areas seeing higher incidence at different times.

Students may have a general sense that the flu season is worse this year, and some schools have even been closed due to outbreaks of the flu. Even so, a look at maps (above) from the CDC comparing the same week in 2017 and 2018 is eye opening. Tip: Put these maps on a projector or smartboard and talk with students about what these maps show. What do your students notice? What differences do they detect? What conclusions can they draw from looking at these maps? What other questions do they have about the flu or about the data used to assess the flu season after viewing these maps? (You can compare other weeks year to year using the CDC's FluView tool.)

While several strains of the flu have been reported this year, the flu season is being dominated by cases of people testing positive for influenza A(H3N2), a specific subtype of influenza. (Other subtypes students may remember from years past include H1N1 and influenza B.) While the CDC says that since the 2009 H1N1 flu pandemic, they have seen patterns year to year of an H1 strain alternating with an H3, this year's flu season breaks the pattern. H3N2 is predominant this year, just as it was in 2016-2017. The 2014-2015 season, the season to which this year is being compared, was also dominated by cases of H3N2. The following image from the CDC offers a look at this year's flu season by type. (Note that not all cases of the flu are tested for subtype.) 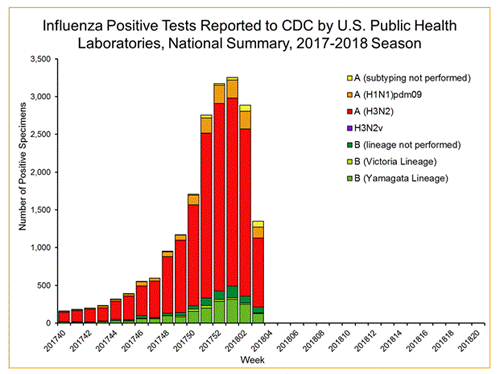 A bar graph of influenza positive tests reported to the CDC for the 2017-2018 flu season shows positive tests between week 40 of 2017 and week 4 of 2018. Positive influenza tests peak around 3,300 specimens during the first week of 2018. The graph is color-coded by sub-types of influenza and the majority of all positive reports come from a sub-type of influenza labeled H3N2.

Looking at the bar chart above, students can observe and talk about the relative numbers of confirmed cases of different types of flu this year. It is important, too, to understand how these numbers are obtained. Do these numbers indicate every instance of the flu? Does everyone who has the flu go to the doctor? Why or why not?

The flu vaccine, which is always formulated based on predictions of three or four strains to protect against in the coming flu season, is currently being estimated to be 32% effective this year. See the background tab of the BLASTing Flu Viruses project to better understand how the flu vaccine works. While the flu vaccine has a lower rate of effectiveness than other types of vaccines, this is particularly true with H3N2. According to the CDC, the flu vaccine does not perform as well against the H3N2 strain as it does against other types of flu. Given this, what conclusions might students draw about the fact that H3N2 is making a repeat appearance this year and even more people are getting sick? What factors may be contributing to the severity of this year's flu season? (Tip: this is also a good time to talk about the prevention of the spread of germs! The Spread the Soap, Not the Germs project is a great way for students to see firsthand what it takes to minimize germs on the hands with handwashing.)

A Lesson Plan for Classroom STEM

After reviewing the maps and charts above (along with others available on the CDC website), teachers can talk with students about a range of related STEM topics. The following free guided Lesson Plan enables in-class exploration of the immune system's response to a virus:

Interested students can also learn more with the following independent student projects. Teachers can also use these projects to help talk about genomics, germs, and the ways in which data is presented to the public:

A great deal of data is available to the public on the CDC website, but does the data give a complete view of the flu season? Why or why not? Talk with students about the ways in which data is collected and generalized. What has to happen for a patient to be "counted" in a flu statistic? How might this alter the data? What changes might help create an even more accurate picture of a flu season or other health epidemic? What problems might arise with other methods of data collection?

All of these are great questions to stimulate classroom discussion. For additional hands-on exploration, have students make their own infographics to represent and explain the impact of this year's flu season. 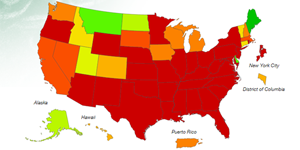