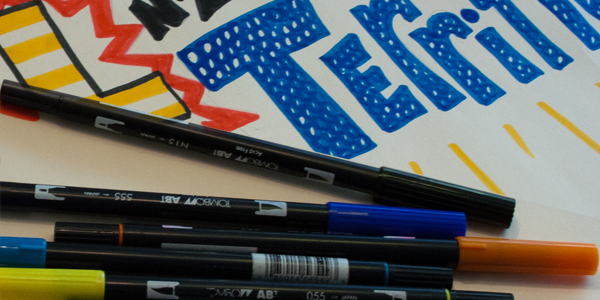 Social Media Lashes Out at the "Science Fair Project"

Have you seen it? The GoldieBlox Super Bowl ad, yes. The LEGO® Movie, yes. The tongue-in-cheek project display board bemoaning the science fair project process and citing a more than 75% dissatisfaction rate among students and parents, as measured by the number of students who cry and the number of parents who yell during the process? Probably.

You may have seen the project display board crop up on your favorite social media site. You may have been surprised to see it pop into your stream from distant corners of the country or globe, from parents and grandparents alike. You may have been surprised to see it crop up in the stream of a parent or friend who you know has a very engineering- or science- or technology- or math-oriented kid, a parent you know spends countless hours encouraging, lauding, and supporting her student's hands-on science and engineering projects—and proudly sharing those same projects with her friends and followers.

It happened to me. I first saw the "science project turmoil" project display board shared by the parent I would least expect to spare it a second glance, much less share it. The next morning, I saw the photo shared by someone else in a completely different part of the country, someone who doesn't even have school-age children. As friends of those friends weighed in with a comment or a thumbs-up on the post, notifications kept popping up (accompanied by a 'beep' on my system) letting me know how much "support" the photo was getting from other people who saw the photo and agreed enough to click 'Like,' or leave a comment, or share the photo on their own stream. I didn't see anyone rebutting the image or standing up on behalf of the virtues and values of hands-on science education—at least not in those two shares of the photo. Even from teachers, I saw "likes."

Puzzled by the near-instant wave of people latching onto the image and issue, I went to the source—the original photo posted in March 2011.

It is both fascinating and frightening to read through the comments on the original photo. There are, thankfully, some people who weighed in noting the positive nature of hands-on or active science education. There is, in fact, a comment by the board creator where it seems that, in part, her complaint is really aimed at the way science fair is presented in elementary school—at the fact that the "competition" aspect of science fair may overshadow the point of hands-on science and turn the science fair into something else, something that invites and encourages far too much parent involvement. Her comment (#48) is there, but as the turmoil board picked up steam anew last week, it appears that by and large, people saw the "turmoil board" and were compelled to join the wave of "why do a science project" comments, a tidal wave of anti-science education sentiment that took on new life with each new like.

Why Do a Science Project?

What gave the "turmoil board" steam when it resurfaced? What prompted people from all corners to share, reshare, like, and comment? If many of those people are people who actually support, encourage, and even enjoy hands-on science and engineering activities with their kids, you have to dig deeper to see what's really at issue here.

Take the science (or engineering) out of it, and the "project" stands alone, with the assumed "assigned" or "fair" being the silent partner in crime, the elephant in the room. The board creator even suggests that without a competitive fair, science projects could be approached differently for elementary school children, done more as family projects and explorations. In other words, it is specifically the school science fair project that is being projected as the cause of family turmoil.

The board, with its googly eyes overlooking the hand-drawn results diagram, goes on to explain why.

So why the widespread jump on the anti-science fair project bandwagon? What buttons did the "turmoil board" press?

At Science Buddies, I am one of the non-scientists. I am exactly the kind of parent that might seem to fall into the "science projects cause family turmoil" camp simply because "science fair" isn't my forte—science fair puts me well out of my comfort zone.

Thankfully, there is Science Buddies.

As a parent of elementary and middle school children, I have, over the last few years, done and witnessed a wide range of science and engineering projects with my kids, ones that have been completed for science fairs and ones that we have done together as family activities.

My lack of engineering and electronics experience didn't stop us from tackling toothbrush robots, light-following Bristlebots, a crystal radio, pencil dimmer switches, play dough electronics, and more. That doesn't mean I didn't wonder with each project if I knew enough to guide the activity or help troubleshoot problems that might come up with the independent (science fair) projects. But, all in all, science fair projects in my house have gone smoothly and been positive experiences all around.

So, where was the turmoil?

There was much more angst with the "build a mission" project, a California History assignment in the 4th grade and a clay roof that took hours with a hair dryer to try and harden. There was plenty of angst any time an assignment to "dress up as your historical subject" came home. (We didn't happen to have Ben Franklin-suitable attire on hand.) Making a half dozen artifacts to go along with a history research project certainly took as much time as the science fair project. Indeed, there have been flurries and scurries with a wide range of creative and "craft"-oriented exercises and assignments.

As I watched the fervor over science fair mount, triggered by a marker-drawn project display board, I wanted to pass out Science Buddies stickers to every person who clicked "like" or "share" or wrote a comment commiserating with the horrors of science fair.

I wanted to grab some markers and make my own Project Display Board of all the things I know that Science Buddies offers that can help remedy the problem, all the tools and guidance that can transform the science project into something students and parents look forward to as a fun way to get really hands-on with a cool science question.

If only all of those parents knew about Science Buddies, I kept thinking. Of course, I work for Science Buddies. So I have an inside view. I know that more than fifteen million other people, including students, teachers, and parents also know about Science Buddies and count the non-profit and its free, online resources as a trusted source. I know they visit the site each year when science fair rolls around.

We need Science Buddies stickers. We need a badge kids can sew on to a troop uniform. We need to go viral in the same way that the "turmoil board" went viral.

Science Buddies has a whole set of keys that can help transform the science fair "turmoil" into a successful experience for students and parents. In part, parents have to get beyond their own fear of science and their own assumptions about science fair. You don't have to be a science expert to help an elementary student do a school science project. But you do have to have the right idea about what a science project is, what it can be, and how to approach it to maximize the learning experience—and enjoyment—for your student. You also have the right to expect that a science fair project isn't simply a homework assignment, something sent home with a due date several weeks in the future and not integrated at all in the day-to-day classroom.

For science fair projects to be successful, teachers have to ensure that projects are integrated into the classroom learning and monitored with clear schedules and check-ins that help students stay on track and also teach students how to break a big project down into doable parts. Science fair projects should not be done the night before they are due. Ever.

There are a number of ways in which teachers can (and should) help smooth the science fair project experience. But in responding to the "turmoil board," the following reminders for parents and students can make a big difference in how the process goes at home:

Here's to Science Fair Project Success in Your House!

While your students finish preparing their science fair projects for this year, I may work on a few project display boards of my own. As the "turmoil board" shows, you can certainly make a statement and communicate information about a project or a process using a project display board! That students learn to share their project results in this way is a great exercise at the end of the science project process!

The following resources and articles may help parents reconceptualize the importance, value, and process of a student's science fair project assignment: 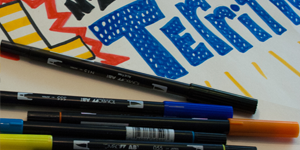 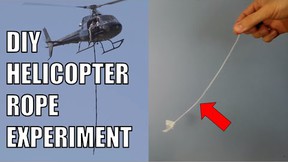 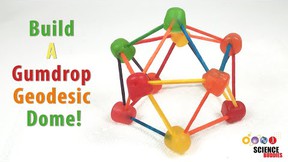 Build A Gumdrop Geodesic Dome!
How to Make a Simple Refracting Telescope (Monocular) 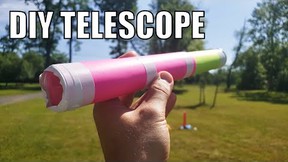